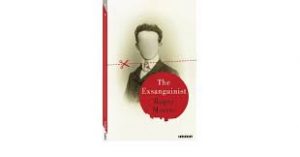 The Exsanguinist, is a novela written by R.N Morris in 2010, it’s a detective story which happens in London, in 1914. It’s about a killer who’s at liberty, and who has killed a lot of people. The main protagonist: Silas Quinn is the police detective investigating those murders, and everything he studied about this case, led him to the Panther Club. The Panther Club is one of the oldest of London’s gentlemen’s clubs, founded by a group of aristocrats, in 1764. There, the detective met a group of men, he suspected that one of them was the exsanguinist, as all of them, had a past related to death. Most of them had already killed or intended to kill someone. Even the detective, Silas Quinn had a dark past. But, the most surprising is that the killer seems to like young people. And on top of that, he drains his victims’ blood. Furthermore he’s an anti Oscar Wilde,  and wants to turn death into a work of art.
« It was like feasting with panthers, the danger was half excitement »

What is the identity of this killer ?  Why is he doing that ? Is he a vampire ? Some think, that he’s taking vengeance for what happened to Oscar Wilde.

As you’re reading, the story you’re getting more and more nervous, you’re confused, you think that you finally found the murderer’s identity but you didn’t.  You are getting into a macabre world, where you can only rely on yourself.

I really liked this book, because it was easy to read. At first, you don’t really understand what’s happening, because there are a lot of details. But when you’re getting into the story, and the police detective starts to investigate the murder, it’s more exciting.  Indeed, as the reader, you’re trying to get all the elements given by the  detective to find the murderer’s identity. You are at same time reader and detective. However there are a lot of wrong tracks, so you’re surprised all the time.

Even though I enjoyed reading this book, I think that it would have been better if the story was longer. I would have liked the writer to maintain the supense to last much longer.
So I really liked this book and I recommend it because when you’re reading it, it’s as if you have a mixture of feelings,  you can feel surprised, shocked and nervous at the same time.

The Girl on the Train (by Paula Hawkins)

First of all, the book has sold over 10 million copies in the world, and was acclaimed by critics, notably by huge authors like Stephen King who describes it as a “great suspense novel”.

The plot: The story is about Rachel, she takes the same train everyday to go to London and everyday she sees the same houses. However, she likes one particularly because every time she sees it, there is this couple outside and they look perfect, that’s everything she would love to have. But one day, Rachel sees something terrible and shocking in this house, and she will realize that she is much more than just the girl on the train.

My opinion: If you like thrillers and mystery (or not) this book is made for you because it’s very easy to understand and to read. Hawkins masters her story and her writing, then gives us very deep and thick characters. My favorite one was without a doubt Rachel, who was very endearing and touching. We don’t know more than she does, so we sympathize even more with her, and we want to find the truth, like her. Then, tension, stress and mystery were always there. I think you’ll never guess the end before you read it because this is very unexpected, and clever. I was speechless and very impressed by it. However if I have a negative point, it would be that the story is a little too long, so if you’re not a big reader (as me) or impatient (as me), it can be a little hard to keep up until the 400th page. But you must hold on because the end is really worth it and is incredible. Finally, The Girl on the Train will bring out your most buried demons, in a deep descent into hell.

The first, by Sophie Kinsella (famous for her novel « confession of a shopping addict « ) is about Sarah, she helps her flatmate (Fizz) because she wants to work as an interior designer. So, Sarah ends up to put wallpaper at her ex-boyfriend’s (David), whom she left a few years ago while he had just asked her in marriage.Exceeded by the attitude of his new girlfriend (Arabella), Sarah is going to express her feelings, and after that, David and Arabella break up.

As far as I’m concerned I didn’t like the character of Arabella because she is very selfish and too girly.

The second by Lauren Weisberger ( famous for her novel « The devil gets dressed as Prada ») is about a New-Yorker called Katie.

She decided to go to Vietnam for a backpacking trip on an impulse, but her  parents and her lawyer boyfriend don’t understand her motivation. This trip is an occasion for her to assess her life but also her sentimental life as she meets a Canadian named Stephen who will  change her life.

I really liked this story because I love adventures, but   I think that the end of the book was not surprising enough.

In my opinion, these two stories are very nice because they are easy to understand and enjoyable. This is also a very good way to learn more vocabulary in English.